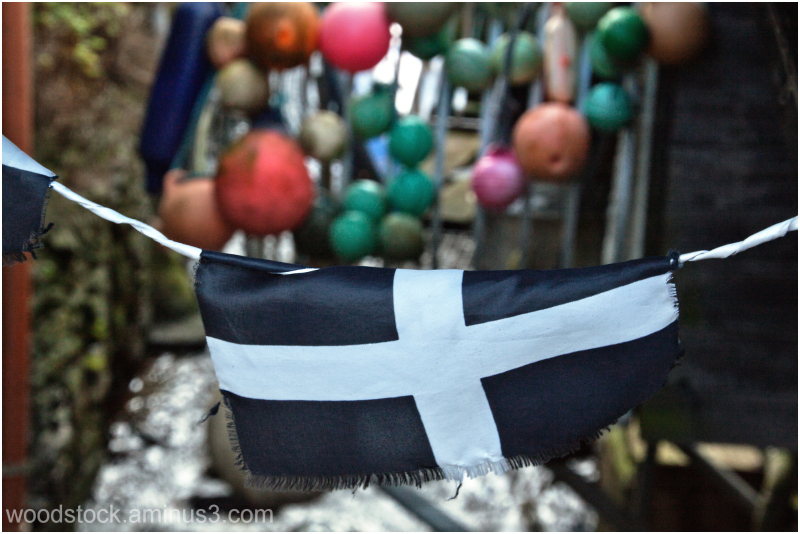 Posted by Nigel (Avening, United Kingdom) on 16 April 2013 in Lifestyle & Culture and Portfolio.

Saint Piran's Flag (Cornish: Baner Peran) is the flag of Cornwall. The earliest known description of the flag as the Standard of Cornwall was written in 1838.[1] It is used by Cornish people as a symbol of identity.[2] It is a white cross on a black background.
The flag is attributed to Saint Piran, a 6th century Cornish abbot. Saint Piran is supposed to have adopted these two colours from seeing the molten tin spilling out of the black ore in his fire.[citation needed] This occurred during his supposed discovery of tin in Cornwall,[citation needed] thus becoming the patron saint of tin miners. The earliest use of the white cross and black background design with relation to the Saint is the 15th century coat of arms of the Saint-Peran family.[3]

Are they still as Independently daft down there?

Interesting was that kind of like a battle flag?

The first time I saw the flag was in Queen's Diamond jubilee parade. One of the boat had a bigger version of this flag. Lovely shot

Now I wonder where you got that background info from:)

what is in the background? looks like fruit/veg on stakes - good info

@Jules: Think Kernow - think sea - think lobster - think pots - think floats - hanging out over a stream which runs through the middle of Polperrow ...........and now it all makes sense ! :-)

Thanks for the interesting comments. A very nice image to illustrate them

Beautiful dof in this street. I love the colours in the background!

A magnificent narrative, Nigel . The image is so perfect hereas well..a very unique look at anhistoric flag to be sure. Thank you for the good piece of education for an old Yank, as well :-)

good depth of field and a beautiful flag of Corn Wall
:)

"independently daft" is one I've got to make more use of!!

A fine shot of the flag with the colorful bokeh.

Beautiful image and interesting information. I like the colorful background.