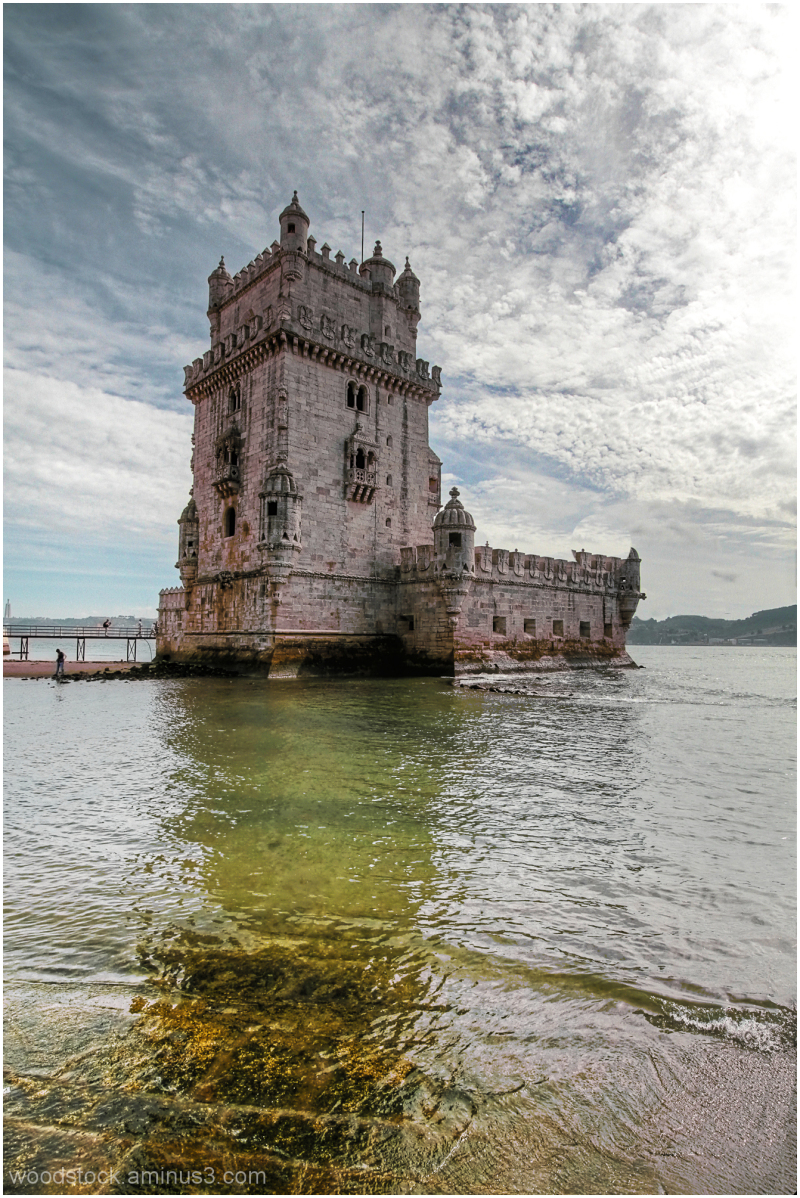 Posted by Nigel (Avening, United Kingdom) on 18 October 2012 in Landscape & Rural and Portfolio.

Belém Tower (in Portuguese Torre de Belém, pronounced: [ˈtoʁ(ɨ) dɨ bɨˈlɐ̃ȷ̃]) or the Tower of St Vincent[1] is a fortified tower located in the civil parish of Santa Maria de Belém in the municipality of Lisbon, Portugal. It is a UNESCO World Heritage Site (along with the nearby Jerónimos Monastery)[2] because of the significant role it played in the Portuguese maritime discoveries of the era of the Age of Discoveries.[3] The tower was commissioned by King John II to be part of a defense system at the mouth of the Tagus River and a ceremonial gateway to Lisbon.[3]
The tower was built in the early 16th century and is a prominent example of the Portuguese Manueline style,[4] but it also incorporates hints of other architectural styles.[5] The structure was built from lioz limestone and is composed of a bastion and the 30 meter (100 foot),[1] four story tower. It has incorrectly been stated that the tower was built in the middle of the Tagus and now sits near the shore because the river was redirected after the 1755 Lisbon earthquake. In fact, the tower was built on a small island in the Tagus River near the Lisbon shore.[5][6]I know it doesn't comply with the rules of thirds but I like that water............

I really like this, and , yes, the water reflections add to the shot. Fascinating place and history too

Really excellent shot, I love the full contrasty look and the great colours.

@Curly: Thanks so much Curly I really value your comments. Good info to Doug today...

Beautiful architecture in a great location you can almost see under the shallow sea.

I agree with Curly that is awesome, but I especially love that old fortress.

forget the rule of thirds! in this case ignoring it has made you create a very harmonious and handsome image! i, too, like the water and the contrast bw it and the very pretty cloudy sky. the tower is in a category of its own, anyway ...

Excellent angle, the tower looks imposing, and the colours are superb!

It works for me so break them rules - majestic frame with beautiful water tones, lush sky and in your face tower.

What a stunning castle.

A wonderful shot of this impressive tower. I like everything about this image.

I am with you, Nigel...the thing that most struck me about this image is the colour and motion of this water and the sky above. The tower shall remain but the sky and water will always change their texture and colour and light - I think these elemnts are stupendous in this frame. I LOVE this composition - A beautiful image, Nigel! :-) dj

Great frame with the man on the left !

This is really beautiful. Your POV makes the rather majestic looking against the sky. The color of the water and the reflection creates a beautiful contrast. I just love the ornate architecture.

Magnificent against that sky!

I love the water too, but the castle itself is fabulous. Love this piece of history that has survived so well.

Stunning shot of this spectacular tower and the wonderful sky !!!

A great capture of a beautiful tower with great textures! And I love that sky. I am ALWAYS amazed when structures last as long as they do when we can't get structures to last 100 years in the States! :-)

I wouldn't worry about the rule of thirds too much, so long as the image is balanced.